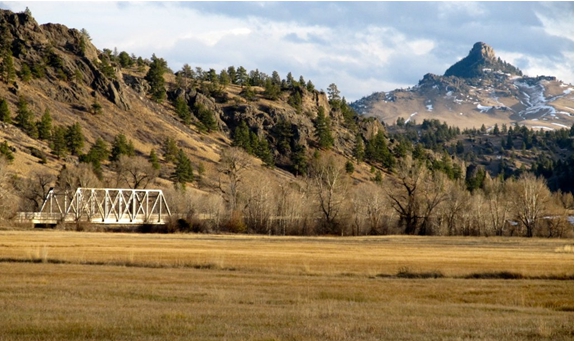 Fort Collins, Colorado was interesting only because it was to leave its mark on us.  One Sunday morning, Butch and daddy decided to take the day and go fish.  I think the lake was call Red Feather or something like that.  Anyway, mom decided she and little brother and I would go to Laramie, Wyoming to look it over.  It was raining that day and the speed limit was at least 70 mph.  Highway 287 is stamped in my mind which is strange.

Let me explain, daddy always drove a big car.  But because of now hauling a bigger trailer we would have had to put overload springs on the car.  Until we got the big trailer,

we had always had Kaiser’s  (a car that is no longer built like the one above) and it was a big car, but now we had a Cadillac.  This was probably our second or third big car since we were pretty hard on cars with all the mileage.  However, for some reason, we had pulled the trailer to Fort Collins with a one-ton 1950 stake bed dodge truck and mom had followed in the car.  Thank goodness we had the truck which dad and Butch had taken to the lake.  It looked something like this one.

Mom, brother and I left for Laramie in the Cadillac.  Just before getting to Laramie, there was a bridge that sat just past a pretty big curve in the road right after you start down from the top of the mountain.  It was absolutely pouring rain.  After mom topped the mountain and started down to the curve, she applied the brakes and they locked and we went in to a fast skid.  The police said we probably hit the bridge post and railing at about 80 mph and if we had not been in a heavy car we would have probably all been killed.

I remember hearing brother crying when I woke up and mom was groaning. The ambulance was not there yet, but people were standing around. I didn’t really have my senses back. Tinkerbell was in the floorboard covered in blood.  I looked at mom and the front wheel was in the floor board by her knee and steering wheel was in her chest.  Then I realized I could not speak.  I saw blood all around me, a hole in the windshield where I had obviously went through part of it and then back again.  My leg was bloody from getting cut on the clock glass in the dash. That’s about all I remember, I guess I was pretty well out until the next morning when a nurse came in and flipped off my sheet.  I remember sitting straight up because the sheet had embedded and dried in the hole in my knee and it hurt, but I couldn’t scream or yell and I looked down and could see my chin and my bottom teeth.  My chin was the size of a baseball and tight and purple and yellow.  I could feel a little with my tongue and it appeared my mouth was torn up.  I probably had my mouth open.  The skin between my bottom teeth and lip was pretty sore and I couldn’t reach it with my tongue

I motioned for a pencil and paper and then wrote down how my brother and mom were.  The nurse stated they were on the first floor and doing okay and I was on the surgery floor and the doctor would be in to look at me shortly.

When the doctor came in, he told me that they were flying a specialist from Denver to look at my jaw and that doctor would be the one to do the surgery.  I was determined not to have surgery.  The thought scared me to death.  After all I had very little, if any, experience with doctors anyway.  I could imagine all shorts of cutting on my jaw.

Anyway there was a lady in the bed across from me and her grandson came to visit her and while he was there an aide came around with magazines, candy, gun, etc.  I motioned, I would like to have some gum.  Little did I know they cost money and I didn’t have any.  Well, the grandson paid for it for me.

I was determined I was not going to have surgery and proceeded to put half of a piece at a time in my mouth and struggled trying to chew it between the bottom molars and top eye teeth.  Daddy always said that pain is something you endure, at times, to make things better.  You don’t dwell on it.

My bottom molars did finally get close to hitting my eye teeth and it was painful but I continued. I did this all day and into the night.  Trying to eat during the day just wasn’t happening.  They tried a straw and soup spoon, but I drooled most of it on the towel on my chest.  I couldn’t get my lips together so it was a challenge.  But I didn’t starve.

I guess they had taken x-rays of my mouth when I was brought in the afternoon before and I guess I was out cause I don’t remember.  But now when the doctor brought in the new specialist, he was astounded to see my jaw had retracted somewhat and expressed this to the specialist.  So they decided to wait and take another look in the morning.  They had no idea I was trying to chew gum.

I proceeded to ask the nurse on my note pad for a brush since my long hair was matted from the blood and didn’t smell too good either. They didn’t want to try to wash it.  The nurse told me that the worst patient was my brother who refused to wear a hospital gown.  He evidently would not do it and they finally had to cut a leg in some pajamas for his cast.  He had broken his arm and leg but was otherwise fine but sore.

I remember they wheeled mom up to see me and she looked terrible.  One eyelid was torn and swollen shut, stitches across her eyebrow, and thick wrapping around her chest and black and blue all over.

We were not released from the hospital yet when daddy told them we had to go.  They insisted mom could not ride and they really were not sure about me as yet.  Although my chin had really receded and they decided not to do surgery and just see if it would work its way back to normal.  But, when daddy said, we had to go, guess what, we went.  Mom was worried about the cost and daddy assured her he had just taken out a hospital policy in the last town.  Sure enough, everything was taken care of.  I can tell you that I would take bets daddy would have never paid another month on that policy anyway.  He only took it out to appease whoever sold it to him knowing we would be well down the road before a payment was due.

The Universe works in mysterious ways.

And here I am: RodeHardPutUpWet.  Go figure.