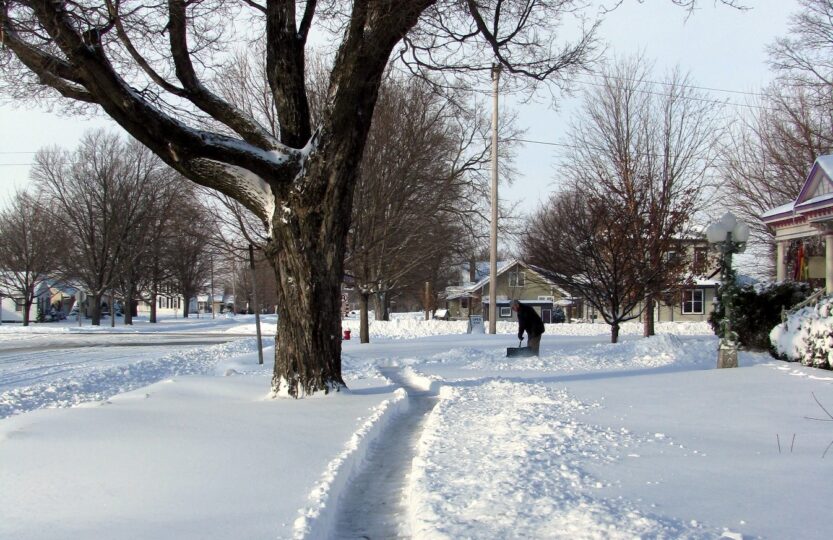 At one point back when we were still without a trailer and back traveling with Brooker Sales Company, dad had a sale in Red Oak, Iowa.  We ended up renting part of an older lady’s house. It was really cold and deep snow outside and by now I could enroll myself in school and was shown the way to my class.  Mom had told me to wear my pair of pants since it was so cold. Dad pointed the way and I walked to school.  I’m figuring that mom took brother and enrolled him.  I got to my class and the teacher said to me, in front of the whole class, that little girls didn’t wear pants to school and I would have to go home and change into a dress.

I was so embarrassed.  I went home crying and told mom what had happened.  She had me stay there until dad came in for dinner.  By then my face was dry so daddy didn’t see me crying. When mom told him what happened; he told me to get in the car and we headed to the school.

We went by and got the principal and took her to my classroom.  I was scared.  Daddy proceeded to tell them in a loud voice that when they started buying my clothes they could tell me what to wear.  He went on to say, “did they want the boys to look at my ass when I bent over at my locker” and told her the fact the teacher embarrassed me to no end.  I mean this went on for awhile and I figure anyone within hearing distance heard what was happening.  Daddy was really angry.

Well, dad left and there I was in the classroom thinking no one would want to be seen with me.  Then in a little while an announcement came over the PA (Public Address) system.  That speaker goes to every room from the office with announcements that everyone needs to hear.  The principal stated that basically the new rule is that girls could now wear pants to school.

Wow, the girls were ecstatic and I now had plenty of friends.  I would have never expected my father would stand up for me like that, but he did.  As hard as dad was on us, I can look back and see that he did in his own way, love us.  He taught us things that we still use to this day, things that are not taught in school.

As far as friends go, it was a lot harder to have good friends in the northern states.  I’m not exactly sure why maybe because I talked funny.  But in most instances they gathered around me at recess and wanted me to say different things because it was so different than the way they said them.  I guess it was just different up north and I was a hillbilly.

Thinking back about this period when we still didn’t have another trailer, dad had a sale in Durango, Colorado.  I was in the 5th grade and we rented a little duplex.  It was summer and absolutely beautiful.  This little duplex backed up to a little stream that had had a tree fall across it.  We’d walk across that tree and play in the stream.  There was also an old train engine that we played on for hours.  Last time I was there they had removed it and the train company had taken it back to the station to refurbish and start using it again.  They had built the Chamber of Commerce office on that site but the Stream and old duplex is still there.

Durango was great fun.  There were sites everywhere.  Cave of the Winds, Pikes Peak, Seven Falls, Garden of the Gods and “wow” the Navajo Ruins.  I cannot imagine how lucky those kids were that lived there full time.  Later we will be lucky enough to have another sale there in the winter.

Pikes Peak over Garden of the Gods

There are, of course, towns I don’t remember and then there are towns that were just towns and nothing special.

Let me name a few towns we lived in where nothing really happened and were really boring.  Paris, Missouri; In Oklahoma there was Cheyenne, Covington, Enid, Roosevelt, Perry, Warr Acres, Bethany, Hugo and Turley.  Then there was Chattanooga, Tennessee; Fairbury, Falls City, and Hastings, Nebraska.  I didn’t particularly enjoy Ft. Collins, Colorado either and you’ll see why later.  We spent lots of time in Kansas.  There was Liberal, Goodland, Hiawatha, Hillsboro, Ness City, Olathe, Parsons, Moline, Wichita and Pratt. There was Peoria, Rockford, Paducah, DuQuoin, Kankakee and Erie in Illinois.

Biggest thing I remember about Illinois was they didn’t like southerners. They called us trailer trash, gypies or hillbillies and one teacher told me I was to pronounce Illinois with No Noise.  It was just pronounced Illinoy.  I couldn’t wait to leave that state every time we had to go there.

The ones in Texas were Alice, Amarillo, Fritch, Lamesa, Converse, Crockett, Kilgore, Houston, Midland, Spring, Plains, Odessa, and in Wisconsin there was Sheboygan, FondDuLac, and  Manawa. Nothing in Wyoming (that is a city also), Michigan nor South Bend, Indiana either.  Now these were all towns that at least I remember, but was nothing much to see or do.  The others I will list along the way and what occurred while living there.  Then there are some that I don’t even remember the names.  I will list others that I didn’t list here where things did happen in later Blogs. Please remember that I was pretty young in beginning these travels and I’m letting you know what I remember and how I remember it happened. It gets clearer the older I get, of course, lol.

P. S. To clarify, I’m sure there are some really nice people who live in Illinois, I just didn’t find them.

Until next time, just grin and let people wonder what you are up to.