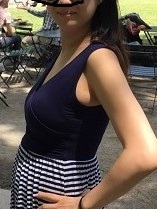 Ok, I am expecting a baby and so excited when upon my next visit to the doctor, he says I will never carry this baby to term and he wanted me to realize that and to be ready to have a miscarriage. He didn’t want me going bonkers on him.  WHAT??

I bought a couple maternity outfits so people would know I was expecting.  I didn’t need them because I never did show.  Being tall and skinny, there was just no showing ever through the whole pregnancy.

I never could get it through my head that I was carrying a baby that would never be born alive.  That’s crazy.  So I told the doctor that I was going to have this baby period!!!  He said he would do everything possible to help me carry this baby to term.

I had to go into the clinic every day or so for a shot, then it was every week then every month.  One day I needed to go to the Laundromat and while the clothes were washing, I went over to the 5 and dime to look around.   In just a short while, I passed out on the floor and some clerks took me to the back room and laid me down.  It appeared that I was feeling better and really needed to get my laundry done and get home.  I did and made it fine, BUT……

At five months, I had started bleeding.  I called the doctor and all he would say was remember me telling you that this would happen?  Anyway, he told me to go to bed and keep him apprised as to what was happening.  Fred was up in northern part of Oklahoma and wasn’t going to be home until the weekend, so my neighbor, who was an elderly woman, kept me fed and checked on me regularly for a week or so.

Finally, the bleeding quit.  Fred and I found a 4-plex in Bethany, Oklahoma that was better than the trailer we were living in in northern Oklahoma City.  I still had my doctor at St. Anthony’s Hospital downtown.

The girl who lived next door was also pregnant and also had a husband that had to be gone a lot on his job.  So for the next few months I had a friend.

Then one day I had a pain my neighbor brought over her Rainbow Vacuum which had water that swirled and heated and she put that on my back and it seemed to help some.  But I decided that afternoon to call the doctor and he told me to get to the hospital right now and check into the OB floor.  Well, I called my mother in Ada, Oklahoma and told her my plight and she said she was on her way.  Ada is only about 85 miles from Oklahoma City and she was there in short order.

She loaded me in her car and away to the hospital we went.  OKAY, have you ever wanted to knock the crap out of someone?  Well I did.  This nurse on the OB floor decided to question my very existence.

So off to the exam room, stripped and straddled I get examined.   She states, “Well, you are in labor, but you won’t have this baby for a day or two and if you stay you will have to pay for the room”.  By this time, I was pretty well, pissed.  “I told her in no uncertain terms that my doctor had told me to get a room and that is exactly what I was going to do.”  So I was put in a room.  This is late afternoon and mom went back to my house and would be back in the morning.

About close to midnight,  I had a bad pain so I rang the nurse, yep, same one (guess she was pulling a double, just my luck) , and told her that I had a bad pain and needed something for it.  She said, you best get ready for those pains, you will have a lot of them.  Again, I asked for something or I would call my doctor and she said, “Well, let me examine you again.”   Then she pulled the sheet back and all I could hear at the top of her voice was “BRING THE CART”.  Yes sir, the head was about to start clearing the canal.   I got to the delivery room in time for this little intern to say “Mrs. Carrouth, can you grunt?”  That was a no brainer.  Yep here he was, now laying on my stomach while they cut the cord.  He was perfect, a little tiny maybe at 5 lb 13 oz,  but all there.  He was beautiful.  I was asked it I wanted his birthday on the 16th or 17th of March since he as born straight up midnight.  I opted for the 17th which was St. Patrick’s Day.

The next day Fred was there and we picked out names.  We ended up with Shaun, which was an Irish name for that day and for some reason we chose Raymond.  I’ve never figured that out.

The doctor came in and said they thought Shaun had Jaundice and would need to stay in the hospital a day longer.  Well, it turned out he was fine and on the third day we went home.

That weekend we had a Jam session in our little one bedroom and Shaun slept right through it in his basinet behind the couch.

I enjoyed the evening and I was sooooo happy.  My world was now complete.  WRONG!! We went to bed and I rolled over and told Fred I loved him and he said, “I don’t love you and I haven’t for over a year and we will need to separate until I can figure out just what to do.”

Next day he said he would take me to my sister’s  (you know the one I called my sister, Lynda) in Odessa.  Lynda’s little girl, named after me, was now 1.  At any rate he would let me know what to do from there, but he didn’t want me calling or telling my father.  Remember they were friends.

At this point Shaun is about a week old and on the trip down there, he got Colic.  Fred left me with the car (he flew back I think) and $20.  That $20 didn’t last the first emergency room charge for a shot to calm the colic.  Shaun was so miserable and there was nothing I could do for him.  He was on formula and that ran out.  Thanks to Lynda who helped me pay for things I got formula.  I had called Fred every day but he never answered.  I was now going on 3 days and Shaun was no better.

Finally, Joe, Lynda’s husband, who was Italian, said his mother used to give the babies Slo Gin which helped them with the pain of colic.  Brother, let me tell you by now I was willing to try anything to help all of us get some sleep and especially Shaun.  He was hurting to badly.

So Joe gets some Slo Gin and put it in some cola.  We put a little bit in a straw, maybe a ½ to 1 inch.  Shazam!.  He slept all night.  Of course, I watched him all night because I was afraid he might not wake up.  But he did and was great from that day forward.  After the next week or so and still not getting hold of Fred, I finally called my dad.  I was totally broke and owed Lynda and Joe and I could not go any further.

Daddy had some friends bring me money and me and my little less than a month old baby hit the road for Ada.

First things first, daddy took me to his attorney and I filed for divorce.  Then after about a month, I guess, daddy told me that he had raised his kids and I would need to raise mine.  That I was not going to live with them and he was not raising my child.

Dad helped me buy a trailer and I got a job in Oklahoma City and the girl (whom I love to this day) and lived next door kept Shaun for me.  Her husband was in Vietnam.  She had two children of her own and she was great with Shaun.

So, here I am settled and the $100 a month that I asked for in the divorce from Fred, never came, but I was able to pay my space rent and groceries, gas and etc.  Well, at one point, I was so broke that I ate popcorn for supper for three nights.  I fed Shaun mostly grits,  so we made it.  I’ve always been proud that I raised Shaun to the best of my ability and I was now getting over the hurt of the divorce and coming to terms as to who I was.

I disliked Fred and was hurt, but never hated him. After all he was partly Shaun and I couldn’t hate that.  Sometimes, people do what they have to do and you have to realize that life is full of experiences and each one has their own experiences to live through.

So as a new life starts, I’ll leave you here with: